From a grain of sand sculpture – the sand Festival on Rügen

SANDFESTVAL IN BINZ:
There are many reasons, the largest island of in Germany to visit. Because Rügen offers both beautiful nature, an interesting story and healthy sea air. It doesn't matter, If you visited one of two national parks, snuggles up to read in a beach chair or discovered the culinary side of the island, is everything taken care of Rügen. For several years the island to an attraction is richer, the sand Festival in BINZ.

After the failure of the record “The world's highest sand Castle” in the year 2017, a new record attempt was launched in this year. Most 23. May 2019 the construction was begun. The 17 Metres high must be the Castle this time, Thus it is enough for the entry in the Guinness Book of world records. The current record is 16,68 Meters and was 2017 in Duisburg. This time will be more than 9000 Tons of sand required. Beginning of June 2019 then measure the artwork by the judges of the Guinness Book of records. 2017 rushed 5000 Tons within a few seconds. At that time, the object was built very steep, now the Fundment is wider. It is possible, the giant sand mountain measures 17,66 Meters, making it 98 Centimeters higher than the current record Castle in Duisburg. 11.000 Tons of sand were used. The work of art shall as a part of the Binzer sand sculptures exhibition up to the 3. November can be seen. 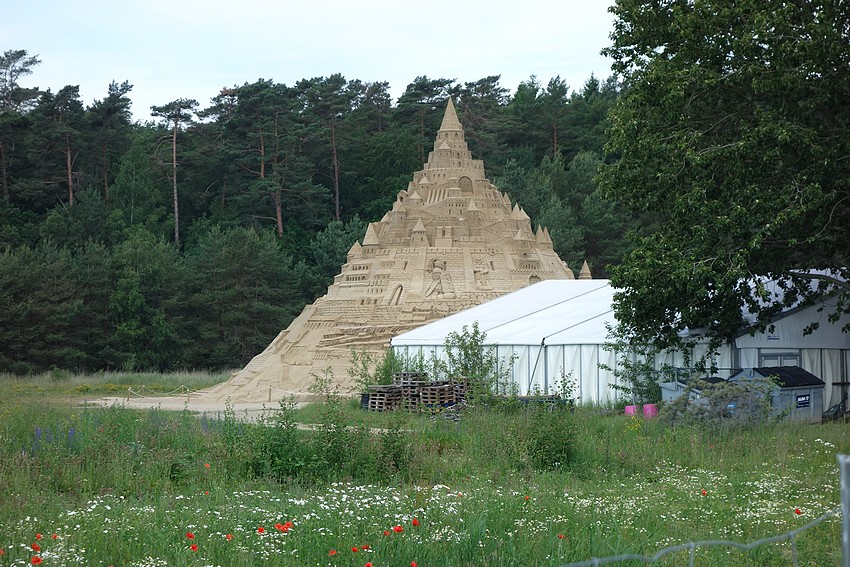 The entry in the Guinness Book of records and other information about the construction of the The world's highest sand Castle provides the following article in English language: Guinness world record.

Ephemeral works of art from sand

2010 was it so far, the seaside resort of BINZ invited visitors to the first sand Festival. Since then, this spectacle is an integral part of the Rügen event calendar. Between March and November, you can admire then subjects to annually changing artistic sand sculptures on the marquee. So could the visitors for example already stars from film and television, Marvel at the fairy-tale characters and also a diverse wildlife. And there was even a world record attempt already. So we ventured out because, to build the world's largest sand Castle. Viewers could watch the growth of the towers from the sun terrace. 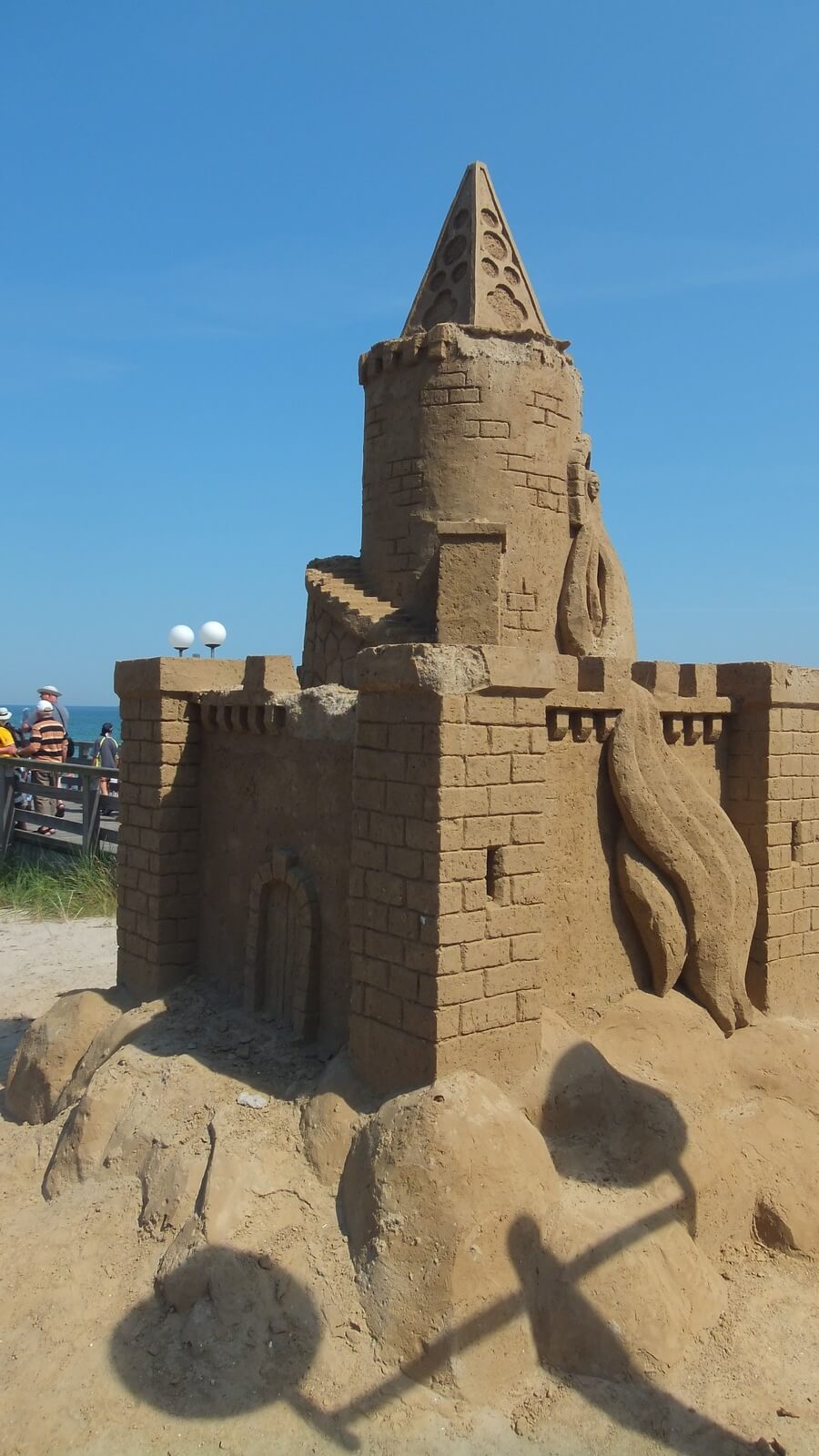 A particularly interesting detail: The sand for the sculptures is extra imported from Holland, because this is to process scharfkantiger and better. First it must be pressed into blocks, which then caused the fantastic works. With saws, Blades and knives make them then to work the international artists and model the faces, Animals and buildings.

Fun for the whole family

Not only for adults, it is a special experience, to visit the sand Festival on Rügen, Children won't be bored here. After you have admired the sculptures together, You can specify the small newcomer equal hands. In its own area, children can try work on the sand blocks and create their own works of art. And dogs have to stay not at home, on a leash, they are welcome as visitors.

After the time change, we close one hour earlier, so already to 17.00 Watch. Last admission is then 16.30 Watch.

May be like dogs in the exhibition - on a leash of course. 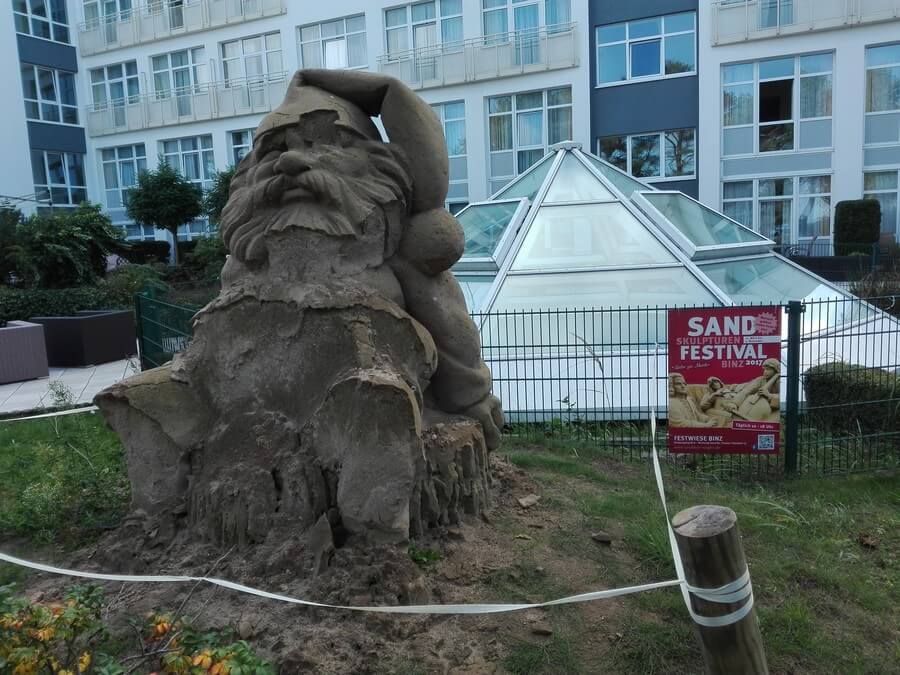 Sand figure on the promenade of in BINZ

The sand Festival is annually on the marquee in BINZ in the Proraer Chaussee (L29) Instead of. This road connects BINZ to Prora. To get from the Centre of BINZ, so you can find the festive meadow on the left near the train station.